The Ascent of Media: From Gilgamesh to Google via Gutenburg 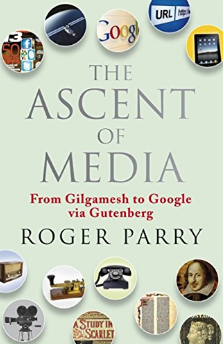 'As some infamous business names have crashed it is important to be reminded that enterprise still matters and leadership counts. Roger Parry takes us back to basics, but with contemporary insights and the practicalities that come from real experience.' - Michael Earl, Dean of Templeton College, Oxford.

'The great strength of Roger Parry's contribution is that it is a rigorous attempt to describe the conflicting and ever-changing requirements that face a chief executive. Parry is himself a CEO, and heads Clear Channel International. Building on his own experience, he provides a logical and comprehensive checklist of the huge range of issues that a CEO must address. Parry covers the field well. I would recommend this book to CEOs - and to business journalists, so that they can appreciate the challenges faced by the bosses they write about.' - Sir Paul Judge (read full review)

'With lucidity, common sense and deep knowledge Roger Parry charts a ten-fold course that every leader and would-be leader can and should follow.' - Robert Heller, best-selling business writer and author of The Fusion Manager.

'Enterprise will be a must-have guide to being a better CEO, whatever kind of business you run.' - Robert Worcester, Chairman MORI.

"both visual and informative, packed with facts, concepts and design innovation..."

"of particular interest to planners and thoseworking in the fields of social development and urbaninfrastructure..."

"a colourful and accessible guide to good practicein urban design ...an enjoyable and educational read..."

“A valuable insight into the rapidly growing world of professional firms”

With insights from McKinsey, WCRS and Aegis a clear guide to running a businesses where the ‘assets go up and down in the lift’”